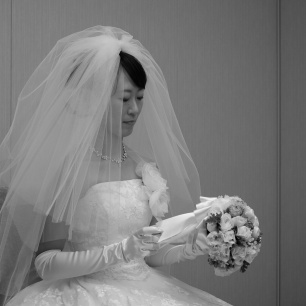 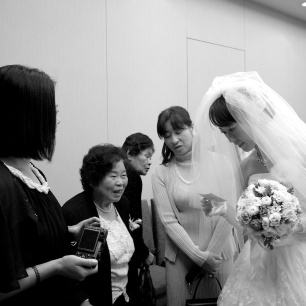 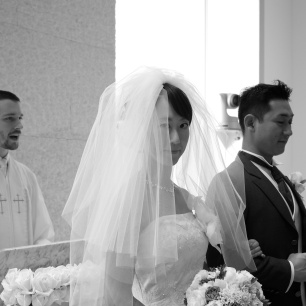 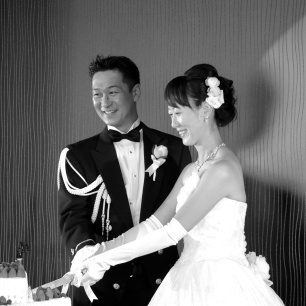 Compact and compartmentalized, held in one of the city’s swish new hotels, the wedding was typically Japanese.

On an icy winter’s day, some time before noon, family members gathered: the bride’s relatives chatting and snacking on mikan in one room; the groom’s extended family mingling in an adjoining space. At the appointed time, the bride and her kin ceremoniously joined the groom and his extended family for formal introductions.

We proceeded to the elevators and on to a small chapel where Christian iconography and choral singing set the tone for the exchange of vows, rings and a kiss.

The newlyweds and their families proceeded to a studio for a formal wedding portrait, the photographer lightening the mood with a small squishy toy.

The reception was on a different floor, but first the guests lined up by the entrance to the hall to present their beautifully packaged cash gifts to attendants at the gift collection table.

Attendants ceremoniously opened the doors and we were ushered into the reception hall, where gift bags were handed out. The newlyweds made a dramatic entrance and took their place at the head of the room at a table adorned with flowers and a fancy wedding cake.

Champagne was poured and a toast was made, after which courses were mixed with speeches and entertainment: karaoke style singing and Japanese dancing. Lights were dimmed and the dramatically spotlit couple lit floating candles on each of the guest tables before the drapes were drawn open and the hall flooded with sunlight. Later, the couple ceremoniously cut and fed each other spoonfuls of the wedding cake. They made dramatic exits: first the bride, then the groom. The guests continued to wine and dine.

The doors opened after a time and in stepped the newlyweds, now attired in formal traditional wear – the bride in a gorgeous red kimono.

The eating and drinking continued, as did the speeches and snapshots, and then the newlyweds and their parents stood together while the groom and his father made final speeches of thanks.

Lastly, each guest filed past the newlyweds and their parents for final farewells and congratulations as they took their leave and a small parting present.

Outside the sun had set and the wedding after parties were about to get underway.