And now here is my secret, a very simple secret: It is only with the heart that one can see rightly; what is essential is invisible to the eye.

Perhaps the most often quoted line from The Little Prince speaks of looking beyond the superficial; sensing a deeper essence. This quote is of course talking of love, but its message is also something photographers struggle with as they try to take meaningful photos. And it seems the longer one is absorbed in photography, the more one is confronted with the dilemma of creating worthwhile images.

The most famous of Cartier-Bresson’s maxims refers to the decisive moment, which he considered the holy grail of photography. His 1932 photo Derrière la gare Saint-Lazare, snapped in Paris, also known as the photo of the man jumping over a puddle, most succinctly expresses this idea of shooting a decisive moment. Expounding on the idea in his book The Decisive Moment, Cartier-Bresson makes a number of statements, including this: “To me, photography is the simultaneous recognition, in a fraction of a second, of the significance of an event as well as of a precise organization of forms which give that event its proper expression.” His decisive moments are about meaningful subject matter and harmonious compositions of light, shadow, line and form. The idea is as much about recognising that the elements in a scene are ‘right’ as shooting the scene at a precise fraction of a second. Cartier-Bresson saw his photos through an artist’s eye, paying very particular attention to the compositions, the geometry in his frames. An equally famous image, also taken in 1932, Hyères, has impeccable geometry: the curve of the staircase leading the eye to the cyclist－who is captured at the moment he is in the space between the handrail and the wall, completing the line; the complementary curve of the kerb; the contrasting flat planes of the walls framing the scene; all aligning to the golden spiral. It’s the type of complex composition a formally trained painter－which he was－would draft.

Artist, photojournalist, and arguably the father of modern ‘street’ photography, Cartier-Bresson also considered himself a hunter: “The photographer must lie in wait, watching out for his prey, and have a presentiment of what is about to happen.”

This quote brings to mind LIFE, the publication in its incarnation－under the aegis of Henry Luce－as an iconic showcase of photojournalistic excellence, to which Henri Cartier-Bresson contributed, along with masters of the medium like Alfred Eisenstaedt, Robert Capa and W. Eugene Smith. It reminds me of Ben Stiller’s The Secret Life of Walter Mitty, a film whose narrative revolves around LIFE magazine and whose sets are adorned with many of the magazine’s historic photos. In particular, it reminds me of a scene between Stiller’s character Walter and the magazine’s celebrated, peripatetic photojournalist Sean O’Connell, played by Sean Penn. It’s an important scene because it’s the first time the two long-time colleagues have ever met, when Walter finally catches up with Sean, after Walter’s heroic efforts to find him, high in rugged mountain terrain in Afghanistan, where Sean is camped in wait with his telephoto lens mounted on his SLR camera－a hunter waiting for his prey. The scene also unlocks the puzzle that will lead Walter to a missing photo that has been the catalyst for his adventures. It shows the lengths that a photographer will go to find a perfect shot and the time spent in wait for a decisive moment. And it contains this dialogue:

Sean: Well, take your time. Settle in.
Try to be real still, okay?
There’s a snow leopard. Right in this ridge.
So we have to try to be very, very, very, very still.
They call the snow leopard the “ghost cat.”
It never lets itself be seen.

The snow leopard strides into the frame. Sean, visibly moved, motions for Walter to take a look through the lens. Sean, in a euphoric state, looks past the camera at the cat.

Walter: When are you gonna take it?

Sean: Sometimes I don’t. If I like a moment…I mean, me, personally…I don’t like to have the distraction of the camera. Just want to stay in it.

Walter: Stay in it?

A hunter waiting for his prey, the rarely seen ghost cat; waiting for the decisive moment. And the cat appears and stops within the spot metering circle of the viewfinder; and hunter and prey stare at each other; two alfa males, each admiring the other－and Sean doesn’t take the shot. He consciously doesn’t photograph a perfect moment, decides to forego a precious shot. He understands that sometimes it’s more important to live in the moment, a moment unmediated by a lens and frame lines, unencumbered by thoughts of aperture and shutter speed settings, exposure adjustment and ISO controls. A moment when the heart sees far more clearly than the eye ever can. A moment to which the camera can never do justice, but that he’ll cherish forever. 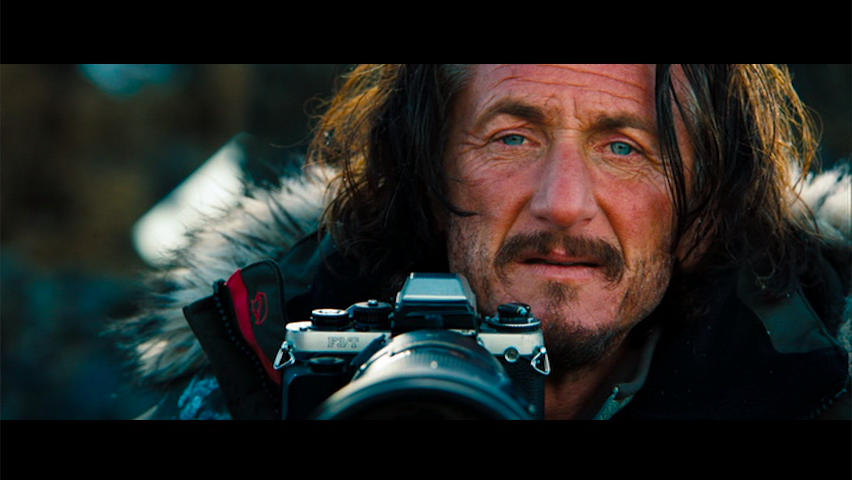 Seeing with the heart, in matters of photography, could be thought of as intuiting your surroundings: entering your scene not only with your eyes wide open but with your senses attuned. There are times, probably more times than we like to admit, when it’s really not worth taking a shot; there are other times when a scene, a moment, is so precious, so personal, that to shoot it is to lose sight of the moment; and there are the many times in-between when photographers need to really look, to see with their hearts as well as their eyes, and to have their gear ready for when they spot those perfect frames and decisive moments. And I think being able to distinguish between those times and being able to be fully immersed in those moments is the key to capturing more meaningful photos.