The cool thing about photography on the streets is that it’s a jazz improvisation. The photographer sets out on a visual exploration of a chosen environment, has some ideas – perhaps about how to use the light or perspective and framing choices – but doesn’t know where this exploration will lead. The photographs that are made are the result of an interplay between the photographer, the camera, the surrounding elements and some serendipity. When all the right notes are hit and it all comes together, the experience and the resulting photos are magical.

This is how I like to approach photographing on the streets and other public spaces, reacting to and working with the changing scenes that unfold before me, aiming for a little magic.

But there’s another approach: to focus on a single scene, treat it as a studio of sorts, explore its visual possibilities through space and time. A few years ago, the photographer and writer Teju Cole, on his Instagram feed, published a series of frames of a bus stop (somewhere in Europe if I remember rightly). Each day he added a photo taken from a new angle or distance, showing a facade of the structure or else a small detail. Banal as the subject was, the images as a series worked as a kind of mediation on that particular structure and on seeing in general.

These photos were taken during three visits to Tokyo’s Shibuya station, in a section of the concourse connecting the Shibuya Mark City complex. The colorful mural visible in some of the photos is Taro Okamoto’s 1969 masterpiece Myth of Tomorrow. 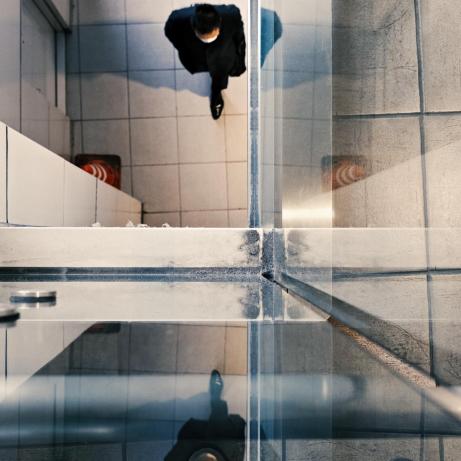 This focused, more studied approach – perhaps a necessity in these times of confinement – can also yield interesting results in a single session and a more confined space, say a kitchen.