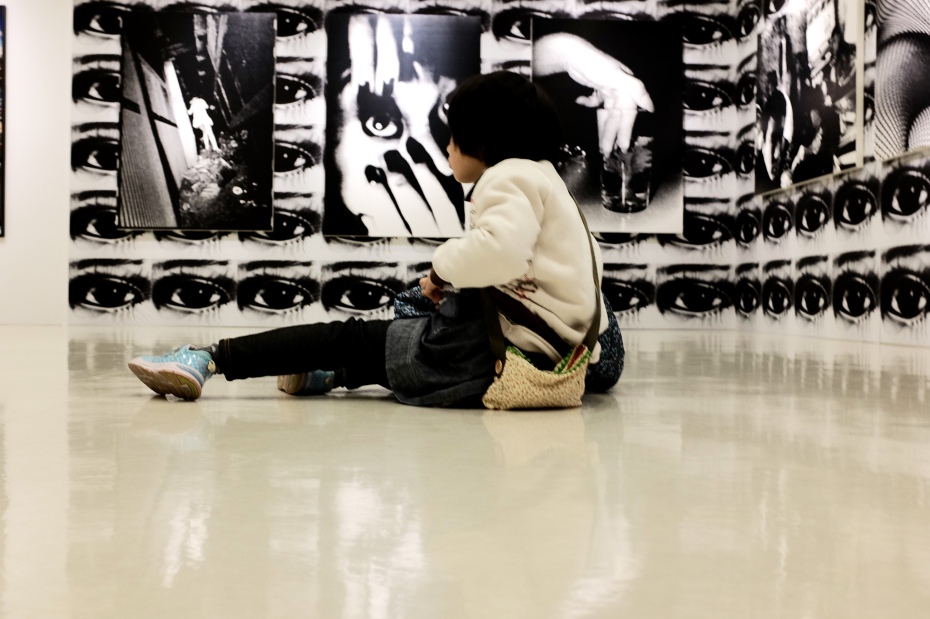 Daido Moriyama, 森山 大道, is the ultimate street photographer. He’s been walking the streets of Tokyo with one compact camera or another in his hand for going on sixty years, snapping fragments of the city and its inhabitants from his singular perspective, both capturing and helping to shape the city’s distinctive character.

A nicely curated exhibiton of Moriyama’s mostly recent work is currently showing at the TOP Museum in Ebisu. The images in Moriyama Daido’s Tokyo: ongoing are spread over three rooms. Greeting the visitor in the first space is a large gelatin silver print of the photographer’s iconic Stray Dog, Misawa, placed by a Warhol-esque silk-screened mosaic of cloned lips, half monochrome, half in color, covering one wall like pop art wallpaper. Opposite is a series of striking oversized inky black, high contrast silk-screened portraits, grainy, some resembling pointilist artworks. The larger adjoining central space contains the bulk of the works and also groups images into tiled mosaics, three photos high, monochrome on one side of the room, color on the other. Close up images of hair, legs and signs are mixed in with frames of alleys, pedestrian crossings and other streetscapes. Here and there is the occasional portrait or reflected self-portrait. The effect of juxtaposing so many images is to give a sense of the city’s at times overwhelming kinetic energy, especially in the color photos, many of them quite lurid. A pair of square glass-topped tables frame monochrome collages, formed by layering and overlapping prints at seemingly random angles, hiding and revealing elements of each. Given the visual complexity on show in this space, there’s plenty to take in, so a small third space serves as a kind of decompression chamber. It’s cloistered, hidden by heavy curtains, and features a few black and white frames from Moriyama’s abstract mesh tights series, each incandescent with the backlighting of the digital screen it is displayed on. The atmosphere here is intimate, contemplative, personal, and despite the eroticism of the photos, is more church confessional than peep show.

A good exhibition is always invigorating. In photography, as in all creative pursuits, it’s sometimes hard to maintain momentum. Moriyama himself bid farewell to photography in 1972 with his book shashin yo sayonara. His hiatus was fortunately short lived and he has since applied himself to his art: Moriyama has one hundred and fifty or so books to his name, has been exhibited dozens of times around the world and has received a handful of prestigious photography awards — and he’s still out on the streets with his camera almost every day. The 81 year old photographer is an inspiration.

Note: photography is not allowed in this exhibition; the photo above was taken in 2016 at another Moriyama exhibition in Tokyo.